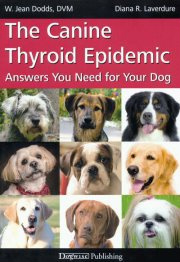 An association between behavioral and psychological changes and thyroid dysfunction has been recognized in humans since the 19th century. In a recent study, 66% of children with attention deficit-hyperactivity disorder (ADHD) were found to be hypothyroid, and supplementing with thyroxine was largely curative. Furthermore, an association has recently been established between aberrant behavior and thyroid dysfunction in the dog, and has also been noticed in cats with hyperthyroidism. Typical clinical signs include unprovoked aggression towards other animals and/or people, sudden onset of seizure disorder in adulthood, disorientation, moodiness, erratic temperament, periods of hyperactivity, hypoattentiveness, depression, fearfulness and phobias, anxiety, submissiveness, passivity, compulsiveness and irritability. After episodes, most animals appear to come out of a trance-like state and are unaware of their bizarre behavior.

The mechanism whereby diminished thyroid function affects behavior is unclear. Hypothyroid patients have reduced cortisol clearance, as well as suppressed TSH output and lowered production of thyroid hormones. Constantly elevated levels of circulating cortisol mimic the condition of an animal in a constant state of stress. In people, and seemingly in dogs, mental function is impaired and the animal is likely to respond to stress in a stereotypical rather than reasoned fashion.

Investigators in recent years have noted the sudden onset of behavioral changes in dogs around the time of puberty or as young adults. Many of these dogs belong to a certain group of breeds or families susceptible to a variety of immune problems and allergies — e.g. golden retriever, Akita, Rottweiler, Doberman pinscher, English springer spaniel, Shetland sheepdog, and German shepherd. The clinical signs in these animals, before they show the sudden onset of behavioral aggression, can include minor problems such as inattentiveness, fearfulness, seasonal allergies, skin and coat disorders and intense itching. These may be early subtle signs of thyroid dysfunction, with no other typical signs of thyroid disease being manifested.

The typical history starts out with a well-mannered and sweet-natured puppy or young adult dog. The animal is outgoing, attends training classes for obedience, working or dog show events, and came from a reputable breeder whose kennel has no prior history of producing animals with behavioral problems. At the onset of puberty or thereafter, however, sudden changes in personality are observed. Typical signs can be incessant whining, nervousness, schizoid behavior, fear in the presence of strangers, hyperventilating and undue sweating, disorientation and inattentiveness. This can progress to sudden unprovoked aggression in unfamiliar situations with animals, people and especially children.

Another group of dogs shows sudden onset seizures or seizure-like disorders that can occur at any time from puberty to mid-life. These dogs appear perfectly healthy, have normal hair coats and energy, but will suddenly seizure for no apparent reason. The seizures are often spaced several weeks to months apart, may coincide with the full moon, and can appear in brief clusters. In some cases, the animals become aggressive and attack those around them shortly before or after having one of the seizures.

In dogs with aberrant aggression, a large collaborative study between our group and Dr. Dodman and colleagues at Tufts University School of Veterinary Medicine has shown a favorable response to thyroid replacement therapy within the first week of treatment, whereas it took about three weeks to correct their metabolic deficit. A dramatic reversal of behavior with a resumption of previous problems has occurred in some cases if only a single dose is missed. A similar pattern of aggression responsive to thyroid replacement has been reported in a horse.

Our ongoing study now includes over 2,500 cases of dogs presented to veterinary clinics for aberrant behavior. The first 499 cases have been analyzed independently by a neural network correlative statistical program. Results showed a significant relationship between thyroid dysfunction and seizure disorder, and thyroid dysfunction and dog-to-human aggression.

Collectively, these findings confirm the importance of including a complete thyroid antibody profile as part of the laboratory and clinical work up of any behavioral case.